Home » A Most Misfortunate Soul

A Most Misfortunate Soul 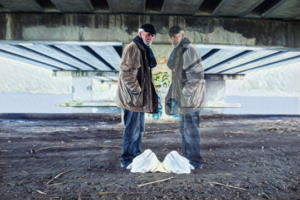 There was no concern of rope or forged chain that held the old piano, swaying high in air, to and fro. Of matter only, is the singular truth that whatever suspect held the weight aloft, did not hold for long.

That a great weight landed upon Mr. Lockwood’s head, ending his life, as the rest of his life, is a lie. It was not the weight that ended his most misfortunate life. Rather, as the old wood piece of junk succumbed to gravity, it splintered. Upon smashing into a hundred large splinters, one small shiver of a large splinter went splaying, cutting through the hot, warm and humid summer air to find a home somewhere in the back of Mr. Lockwood’s rather large, cumbersome brain.

Doing so in such a fashion, that Mr. Lockwood believed a small insect of the flying kind had drawn his blood. Before he could raise his palm to swat the aforementioned flying small irritation away, Mr. Lockwood was dead, splayed himself across the walk, the shattered remains of life and piano evident to all.

It was not what was evident in this tragic scene that bears the slightest importance, not at all. Not one witness would guess, could guess, given hints as well, that the man who lay, dead and cold across the walk this fine hot summer night, was the most misfortunate soul one would ever, could ever, or in this tale, hope to meet.

Ninety-Seven long, tedious years ago plus some small, small change, Mr. Lockwood was born to a fair and wealthy maiden who in turn had found a fair and wealthy prince. Unknown to both Maiden and Prince, an orderly by secured profession, a drunkard by nature, switched without care or caution a bassinet, and Mr. Lockwood went from a life of princely principal to an existence of professional poverty in the space allocated for less than a thousand and three breaths.

Truly, a most misfortunate thing. As a young lad, living under a decrepit concrete and stone bridge, Mr. Lockwood often on a clear, cool unclouded night would gaze off to the distant, and wonder who the fine and pretty people were that lived in that grand, magnificent house far away, on the only hill on any distant horizon.

Life under that old bridge was cold and harsh in the coldest months, and hot and miserable in the sun-drenched days of summer. The old cardboard house had to be rebuilt after every rainfall, and when the river encroached, Mr. Lockwood and his poor mother sought safety in the highest of high ground, just above the bluffs, thickened and threatened by forest and large, dark unknown animals, all hidden and protected by the oak, poplar, and pines.

All Mr. Lockwood possessed in his youth was a tattered blanket, a singular eternally filthy blanket full of holes which from time to time, Mr. Lockwood attempted to rinse in the rapids under the bridge. Mr. Lockwood never understood the origins of the blanket, nor the meaning of the name sewn on a now frayed corner edge, barely readable. One day, while rinsing, a current caught what was left of the filthy material and it disappeared from sight in a single, exasperated and sorrowful sigh of misfortunate loss.

Things being as what they were in Mr. Lockwood’s youth, he was not an unintelligent young man. After all, his genes were of the most superb available, and after considering the irony that the jeans he wore, were so less significant than those he possessed, one can only wonder to the matters and consequences of the universe. That matter and consequence came to be important when at the age of thirteen he was hired, not for his intelligence, and in spite of his unkept and unthreaded appearance, to work deep in the dark coal mines as a digger, apprenticed to one old, curmudgeon Mr. Paxton, who non the less, taught the boy how to dig rock with the utmost sincerity and respect due all rock and coal.

Years passed in the darkness of rock and tunnels and one day, Mr. Lockwood was told that Mr. Paxton’s heart had given out at the end of an especially long and misbegotten day and from that day forward, Mr. Lockwood would be expected to labor long and hard without companionship.

Unknown to Mr. Lockwood, is that Mr. Paxton after a life of hardship had managed to save a small pittance of astounding proportions. Barely known to Mr. Lockwood was that Mr. Paxton had a wife, three sons and a daughter. Mrs. Paxton, along with her sons, in an action unknown by her fair and honest daughter, cheated Mr. Lockwood out of the small amount of gold that his long-standing co-worker had bequeathed him. Of course, it was a most misfortunate thing.

One day, pickax slung over broad shoulders, Mr. Lockwood was refreshing in the cool waters under the bridge, naked and nude as most men tend to be in their youthful days, when a young, delightful fish of a woman swam his way, naked as most fish are, and inquired as to his name and nature.

The young woman had been married some years past, and in an unfortunate, unforeseeable accident, her husband had been trampled to death by a horse carrying a funeral carriage. A funeral carriage carrying the tender remains of a young man that had once lived in a great and magnificent house, far away on a distant hill. It is a most unfortunate thing that Mr. Lockwood never learned that the woman who came to him in the river was none other than Mr. Paxton’s true, honest, and beautiful Laura, for as he asked of her origins, she replied, there was no need to know, as she cared not for her past, her mother or her evil brothers. The woman’s past, lost in the swirl of currents, remained unforgiving as she proceeded upstream.

Time flies as a crow flies, here, there and everywhere but never in form or desire of one’s heart. Mr. Lockwood’s marriage to his true and tender produced a heritage that most men would be proud, and most women in constant and glorious agony, but it is a most misfortunate thing that a poor man, a man of rock, cannot feed, cannot cloth, much less tend, to an enormous flock. In the unseemly tick of times eyes, children were born, children were raised with scraps from the table, tatters for clothes, all in cardboard houses along the wandering river under a bridge, with a hill far in the distant. One a baker, two a ditch digger, three sweeps streets, four works late till the sun comes round, five pours coffee, six acts upon a worlds stage and seven, still a child, lives at home.

Love is as time is, a tender thing, tragic this day, joyous the next. For each of us, it is either or, the two never seen tween the sun and moon of the same day. One cannot say the same for Mr. Lockwood and it is a most misfortunate thing for when eight arrived, his true and only, departed. Departed in a way, only love can, with child in arm, husbands hand in hers, a smile, then her whisper, a love so strong echoed in gentle words.

Surely, a most misunfortunate thing, especially so for an old and bothered Mr. Lockwood who raised his young number eight to be, not a musician, but a musician, a muse of word and rhythm, fashioning string from dinner sinew, horns from large, undiscovered, old and ancient bones, ivories from forgotten circus elephants and forming small and distinct wooden instruments from gnarled driftwood. One day, as the young girl sat upon the rocks of the gentle flowing river that gracefully swept under the bridge, a carriage came to a quick and fortunate stop above, high above, overhead, and an old, a very old young lady helped herself out of the horse drawn carriage.

For no other purpose than to listen to the child sing and play far down below, upon the rocks.

‘It is a most misfortunate thing’ the woman claimed, with finger pointing to Mr. Lockwood’s nose ‘that such a gifted little child be born to one such as you’ and therefore asked, and asked again, and therefore so many more times that Mr. Lockwood finally packed all her simple and cherished belongings and walked with her to the far and distant house on the hill where she lived a splendid life of love and goodwill.

Bones become brittle, bend in shape, muscles ache, some even wither and tither away while thoughts turn to memories dwelling with those which refuse to remain. Age of old, and older still, is a most misfortunate thing is what Mr. Lockwood was thinking as he paid for his daughter’s birthday gift, an old, but beautiful girl with soft pelt hammers and tongue tied ivories waiting to be set free. Mr. Lockwood stayed just long enough, to watch it hoisted out the third-floor door, to be dropped to the cart below, before he turned, to walk away, his heart happy.

It was a most misfortunate thing, for an unfortunate soul.

As the sun rose, in cardboard houses under bridges all across the land that the days sun would wash, people prepared a journey. Fathers, sons, daughters, their children and their children’s children prepared. Some in rich and fine clothes, some in rags and raggedy tatters. Some men good, some perhaps not, women with their men, some alone. Bakers, ditch diggers, street sweepers, night workers, actors, writers and musicians all prepared, all came. And their friends, and their friends’ friends came.

From high on the hill, from far and away, Mrs. Lockwood held her husband’s hand, and smiled at the most fortunate thing.