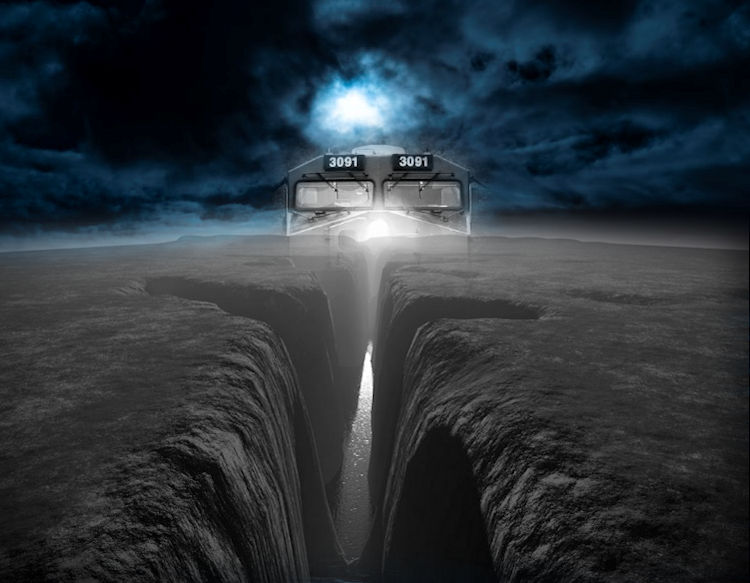 My view of reality is fragmented. Simple and sure, the view from where I set is incomplete. I know it’s incomplete, and I’m left filling in the abyss, because what’s not being seen, what’s not being said is both horrific, terrifying and as dark as any abyss there has ever been, and I need answers, even if they’re my own. Running parallel with the great chasm is a railroad track, the bridge off in the distance to allow passage over abyss has fallen.

We Americans are passengers on that train.

I need answers to simple questions, simple questions that for some reason have evolved into Einsteinian equations. Questions like why do we have daily mass shootings in this country that kills our loved ones, and no one seems to give a realistic fuck?

Questions like who is really in control of this nation, because in a democracy designed for, by and of the people, it isn’t us?

Questions like how come every time we get a financial break, it’s somehow offsetted and I end up taking home even less?

Questions like how does someone who lives in a fantasy world, and I’m speaking to you George Santos, get elected to congress?

Questions like how do we not learn from history. Russia is replicating what Hitler did, and the republicans are replicating Neville Chamberlain.

Questions like how did things that were always considered personal, like sexual orientation, become everyone’s else’s business.

Questions like how did the world of politics that once was dependent upon two parties of differing thought and opinion working together turn into two parties that distrust and hate each other.

Yea, I got questions. Lots of questions, and I’m guessing a lot of Americans got ‘em. And not having answers, the American people are filling in the blanks the best they can. It might appear Republicans have a much better imagination then Democrats, but Democrats are not that far behind.

A decent, honest example of people making up shit to fill the void, is our media. And while Fox might be the worst at filling the abyss with crap, they’re certainly not alone. Thing is, filling the void with shit is actually a good ol’ marketing scheme that sells and there’s not a media outlet in this country that doesn’t utilize the principal that hate and distrust makes money. That’s right, pitting people against each other is a tired and true scheme to make money, a lot of money.

Another well founded example of people just making shit up, is social media. Christ, more people believe the earth is flat then they do round. Social media is a force for which there is no truth, it just doesn’t exist in that world, Just ask Qanon.

Answers to questions the American public have about a lot of things should flow from those we elect in a truthful manner. Not a perfect manner, but an honorable, truthful manner. When that does not happen, when government stops providing sincere answers to the needs and desires of the people, it is no longer a functioning government, and that destroys the bridge over the abyss.

That particular bridge is getting a bit too close for my comfort.