Home » How to spot a stupid person 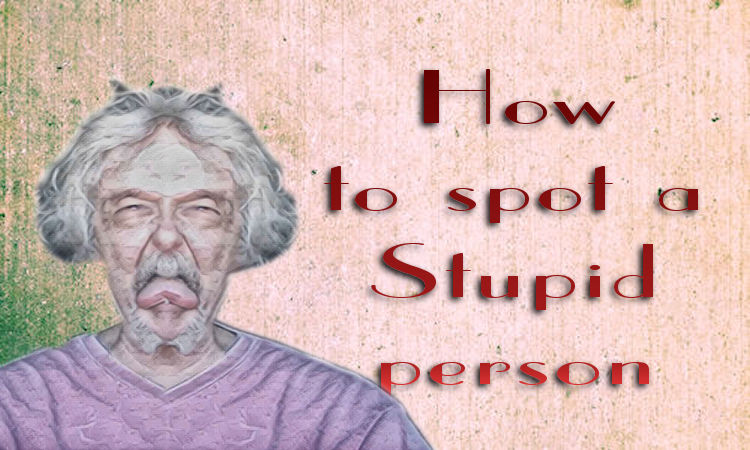 How to spot a stupid person

and no, it don’t take one to know one.

Thing that makes stupidity so interesting, is everyone defines stupidity according to their needs. For instance, Ted Cruz is old, gray and potbellied, we can all agree on that. However, there are those, not many, who thinks he’s the smartest horse’s ass around, and there’s a shitload of people who think just the opposite. Myself, I just think he’s old, like me, potbellied, like me, and mostly gray, unlike me that’s completely grey.

Yep, I’m utilizing politics to point out something important, that without a definition, it’s all up in the air. Which is another way of saying, if you’re stupid, you can’t split out the smart one from the dumb ones, ..if you don’t know what stupid is.

Interesting enough, if you look up stupid in the dictionary, there’s two entries for it. The first follows as

Definition of stupid (Entry 1 of 2)

2: dulled in feeling or sensation : TORPID

still stupid from the sedative

3: marked by or resulting from unreasoned thinking or acting : SENSELESS

4a: lacking interest or point

Definition of stupid (Entry 2 of 2)

If you’re quick on the draw, you know what entry I’m talking about, unfortunately there’s a few out there that just can’t figure it out.

That’s the first hallmark of a stupid person, they know everything.

The second thing to know about stupid people is that for some god-awful reason, they got a need to pass everything they know and hold true, along to you and everybody else. This passing of knowledge from a stupid person to a smart person is both painful and harmful to a smart person. Harmful in the way that in just listening to a stupid person wants you to jump from some cliff, any cliff.

An interesting side effect of this need to pass their stupidity along to all, results in a gaggle, as in a gaggle of geese. That’s right, they tend to flock together in large crowds, raising their voices in acclaim of their own voices.

One would think that identifying a stupid person would be rather easy, with their loud obnoxious voices raising the roofs in their claims of knowing all there is to know, but nothing is further from the truth. This is true because smart people lack something, something important, that stupid people possess.

That’s an ability to believe their stupidity is a gift from God.

Making you as a smart person, outnumbered, like a democrat who accidentally

stumbled into a Trump rally.