Home » A Future to Strive For 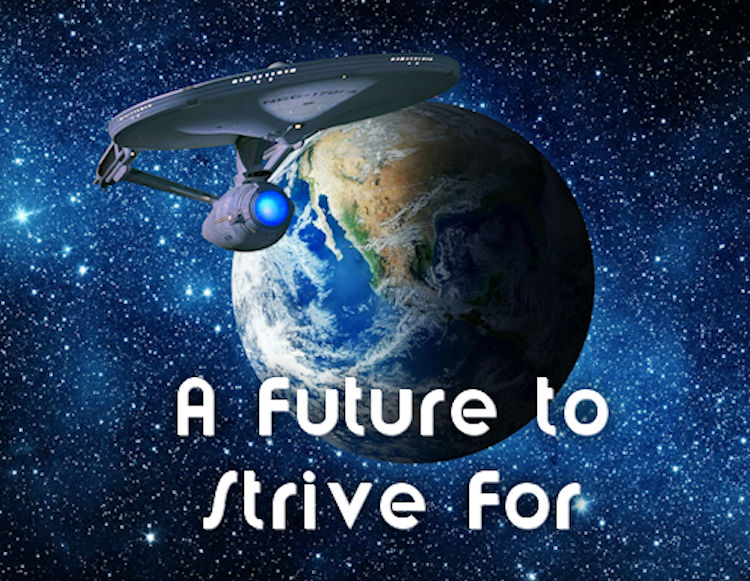 A Future to Strive For

I’m a Star Trek fan, plain and simple. True, I love science fiction as a genre but Star Trek in all it’s varied forms these days holds to a future I believe in. I first read Frank Herbert’s Dune as a kid, loved the movie this year, all the while understanding the story wasn’t the future of our species. Never read Alien, but I knew the movie for what it was, a dystopian nightmare.

Star Trek, sixty-minute morality plays for the soul to ponder was mankind’s recipe for a self-made future. Of all humanities futures written into science fiction, the future that Star Trek represents, is the future I’d love us to reach for.

That’s why I’m a liberal, a democrat, socialist or whatever you’ll call me when you’re in the need to laugh down at my beliefs, kick me in the shins or sucker punch me with vile words.

Star Trek is a liberal world.

If buff white males populated Star Trek-TOS, along with nothing but manly aliens, and Spock, the show would have never been close to a success. Gone would be what Star Trek has always been about, bringing humanity together in search of knowledge. Yes, there would be plenty of action and adventure, but all the little morality tales of right winning in the face of might, of equality and justice would have been lost. The Next Generation would never have happened.

I’ve often believed I have Star Trek to thank for my political beliefs. Now I’m sure there are just as many Republicans, conservatives and perhaps a few Trump supporters who love Star Trek, love the future it presents for all of us. I just don’t understand how they would ever expect to arrive at that future. My god, there’s not even any money! Ferenginar would be more their style. Perhaps Star Wars is more to the liking of Republicans, rooting of course for the evil empire. Leastways when I look at Republicans today, I’m not sure what their future America holds: a collection of states with differing laws ruled by a weak federal government.

Of course, if you translated the Federation as a weak government, with each planet representing as states, the federation would fall apart. I view the politics of Star Trek as I view real world politics, if a member planet violates the prime directive, the federation has to step up and fix it.

In the end, Star Trek is just good, wishful fantasy representing our dreams for a better world, a better future for our children. Thing is, we can actually have a future close to what Star Trek represents… if we were willing to work toward it, unfortunately some will not.