Home » Be Done With It 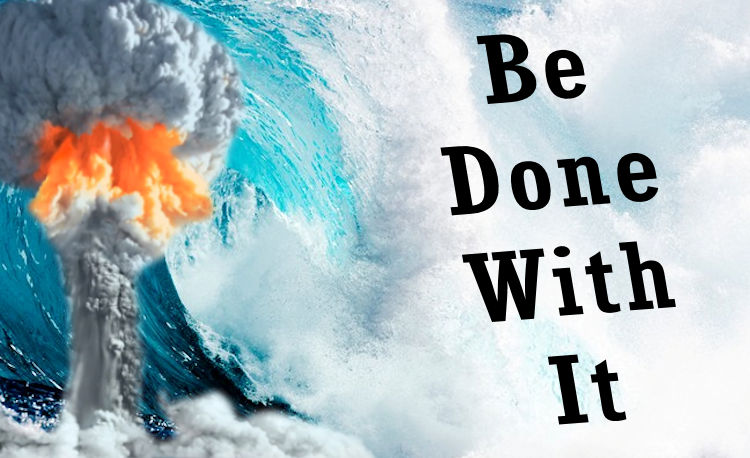 Be Done With It

Maybe it’s time we just launch our nuclear arsenal and be done with it. I gotta tell ya, as someone who once had high hopes for humanity, I’m now thinking those high hopes were misplaced. Thing is, that shifting of opinion bothers me immensely, changing a belief system late in life to one that is diametrically opposed to how I’ve lived most of my life. It’s weird to wallow in the negativity of human behavior, but god dammit, it’s all I see, and most of that shit is based in dumbassery and downright stupidity.

Are we devolving as a species? Yes, we are, fucking absolutely. Thing is, no one is able to notice the reverse in our evolution because we’ve descended past the point where we were able to recognize our de-evolving status. Dolphins, great apes and other intelligent species we share the planet with have taken note and want little to do with us. I can’t blame them, and I’m somewhat confused as to why I’m the last intelligent human alive that is able to recognize the descent of humanity into madness.

I’m reminded of toddlers confined to highchairs slurping up mush with their fingers and spilled apple juice everywhere in the tray. Blah, blah, blah, wha, wha, wha is all I hear with a puncuated gurgle of laughter here and there.

Think about it, it wasn’t too long ago when humans were on the move, reaching for the stars and beyond. We were addressing environmental concerns, poverty, hunger and personal rights. Mankind was working together for a better future.

Now we don’t give a shit about anything, especially about our future, and that means our children’s futures as well. This fact is evidenced not only in the political landscape but in the tired and true conversations being held on Facebook and Twitter. It’s best expressed by the #metoo movement without the too.

What happened to turn humanity back down the slippery slope to stupidity? I’d like to think I could lay blame at the feet of some alien species. I mean, if I wanted to conquer an entire planet populated by an intelligent species, I’d introduce some kind of virus among the population. Not to kill them all, especially if I was an alien looking for a food source. Truth is, there is no evidence of alien interference, as much as I wish there was.

I’m more inclined to believe it’s our own fault, and we should take responsibility for it, but we’ve travelled a bit too far down the path for anyone to take any kind of responsibility for their behavior. Might be all the chemicals we pour into our food, into our liquor supply, I don’t know. Could be that people just got so dissatisfied with their lives for whatever reason, that they just stopped caring. Might be the popularity move from hard rock to rap that made us stupid. I just don’t know.

All I know is there’s a huge tidal wave of pain and hurt coming our way and people are flocking to the beaches.