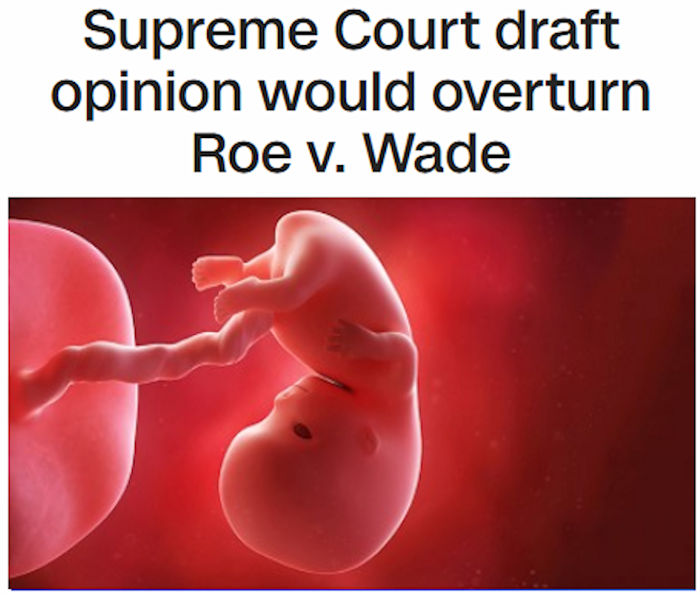 Today’s headlines are proclaiming the supreme court will overturn Roe v Wade, passed in 1973, upholding a woman’s right to an abortion. While not set in stone, the news comes from a first draft of an opinion, leaked publicly by someone who of course, has a vested opinion. Susan Collins be damned, they ain’t no such thing as settled law.

Abortion has always been a wedge issue in politics. A wedge that drives people to the brink of stupidity on both sides of the political aisle.  Unfortunately, it’s also an issue that has a direct effect on the lives of children, mothers, and women in general. That effect is financial, moral, ethical and spiritual, all things easy to praise or condemn based on a personal belief system.

I, like most people would prefer a pregnancy come to full term, that we would all like to see a child fed, raised well, educated and become an upstanding member of the human race. The reality is that is not always possible, and there’s numerous reasons why that is so.

Unlike some people, like the majority writing this reported draft, I don’t believe I have the right to demand a woman carry a pregnancy she doesn’t want, for personal reasons, to term. Especially in the first month of their pregnancy. First and foremost, I’m no believer in saving a fertilized egg because it might be the next Einstein, but much more likely John Smith.

I’d be more akin to listen to an argument in support of abolishing abortion if there was a system set up to support the mothers and children, if adoption was not so expensive and those laws simplified. The average cost is around 70,000 and the wait time can be up to three years. The average age of an adopted child is about 6 or 7.

Adoption aside, if we demand a woman gives birth, and that woman is not psychologically prepared to care for a child, what kind of help would we be offering that woman? If that child is born with significant medical issues, who carries the brunt of the cost? Even with no medical conditions, the premiums for healthcare skyrockets when one moves from single to family healthcare options.

I believe there is an answer to the question of abortion, but our politicians don’t care to travel that path, rather using the issue as a divisive political issue to drive voters to the polls. That in itself is unethical, and as long as ethics don’t exist in the political world, the problem isn’t going to be resolved.

Instead, both democrats and republicans will continue to use the issue of abortion to make their voices heard, to raise funds for their campaigns and to drive their faithful to the polls.

Meanwhile, somewhere in America a child will be unwanted, unloved, hungry, unhealthy, uneducated and will go unnoticed.

PrevPreviousThe Slap, nothing but the Slap
NextBe Done With ItNext