Home » The Slap, nothing but the Slap 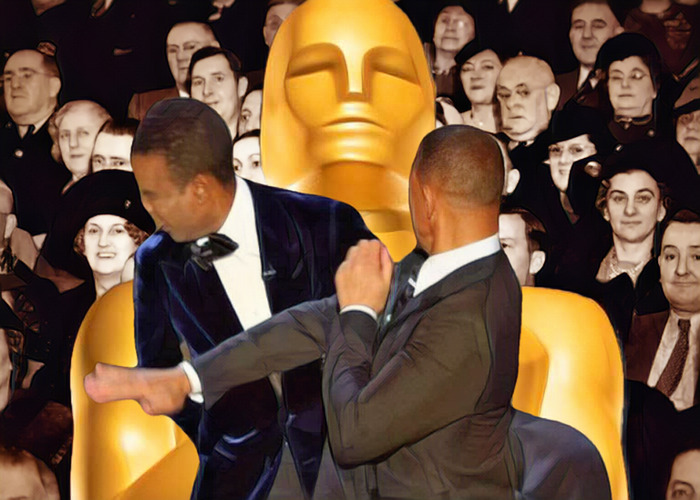 The Slap, nothing but the Slap

Seems the world is obsessed with the slap. Women are happy there are still men who defend their wives, women yelling that they don’t need a man to act in their defense, Black folks who are ashamed that a black man would make a fool out of himself, White folks that point out only a black man would act like that in public, and so on and so fucking forth.

For full disclosure, I haven’t watched the Oscars in years but thanks to social media, Chris Rock and Will Smith will be meme material for years to come. That’s the only good thing that will come out of this incident; people will look back and get a laugh.

Of course, if one were to deep dive into the reasons why Smith slapped Rock, you could come up with a couple.  I don’t care about any of ‘em. They’re all right, they’re all wrong. Actually, I was more shocked by Will’s use of the Fuck word in a room full of his peers, at the Oscars, live on our screens. That’s what turned it from joke to serious for this dude. I had thought it was a practiced joke till I saw that exchange.

Of course, I would have handled it differently than Will. If I was truly defending my wife, I wouldn’t have slapped the offender, I would have pounded him. Of course, If I were seated in the audience, I would have waited, but the result would have been the same. Being an old rough neck hippie though, I get violence ain’t cool, and I am too damn old to hold my own these days, so maybe I would have settled for an apology to my wife, or just let my wife slap the crap outta him.

All in all, this whole incident reminds me when I was younger, it didn’t take much to piss me off. Yep, I had a temper, usually infused with a couple of beers. I almost seriously hurt someone once, and that realization served to temper my emotional rage. One of the things I’m grateful for is I learned to control my anger before I met my soulmate.

If nothing else comes of this slap, we might remember that celebrities are people too, flawed and all. That isn’t an excuse for getting riled, losing your temper and making an ass out of yourself, there ain’t no excuse, you just accept it and move on. Specially now days in a world where dysfunction is more the rule, where there’s bigger, more important things to whine about.