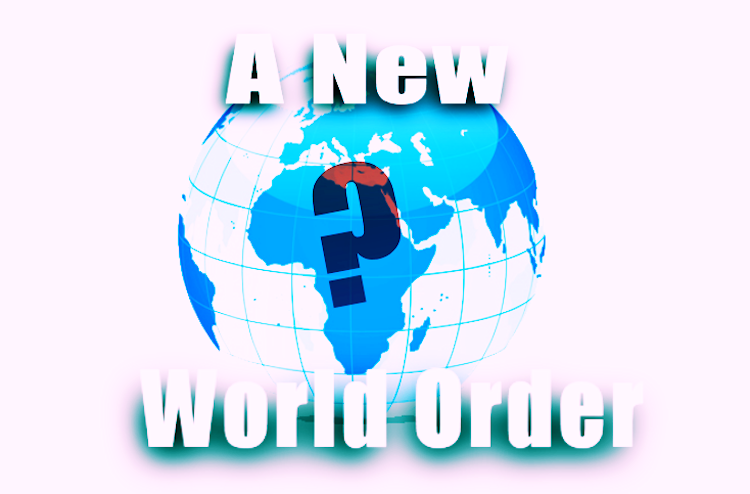 I’m a bit confused these days when I hear people warn us non-believers about the rise of the New World Order. Confused because I’m not sure what they’re talking about, after all the New World Order has been around for a while now. Leastways as I understand what the damn phrase means. Global economics, where the economies of the world are all tied together and ruled by the super elitist rich folks behind the scenes.

I mean, that’s the definition, right? A few rich people are really running the world. The entire, God forsaken world. Their intent, one world government replacing all the nagging little bitches who rally around the cry of national identity.

No one will doubt that we live in a global economy, we always have. From the first day when someone had a handful of dirt that someone else was willing to trade for, there’s been a global economy. Unfortunately, this global economy has never been able to prevent war, famine or disease.

When I reflect on this new world order, it’s from my little, weathered desk that looks out upon a somewhat unkept backyard, somewhere in Minnesota. I’m not really concerned about who is in charge, because it always comes down to the money changers. Local, national or global, it doesn’t matter for me. Course, those who are local hear me yell when I bitch, but I don’t think my complaints get carried up the ladder to the national or global levels. As long as I have my house, my yard, food in the fridge and an opportunity to gain a larger house, a larger yard and even more food in my double wide fridge, I don’t care who is in charge.

But something strange is happening in the global neighborhood. Something that is making me set up and notice.

Sanctions, always economic in nature have always been half assed. Being half assed, they’ve never worked. Ask North Korea or Iran, both have found ways around sanctions placed on their countries. Sure, there’s pain that comes with sanctions, perhaps even crippling pain, but never enough agony to result in the substantial change that those who enacted the sanctions demand.

That doesn’t seem to be the case with the global sanctions placed on Russia. They came quick, abundant and imposed, enjoined and agreed upon by our world leaders in a matter of hours. Those sanctions were quickly followed by corporate sanctions, and those are still ongoing. Any sanction usually takes time to have an effect, needing to filter down to the general populace. Sanctions are by design, directed toward a nations people in order to bring attention to their leaders’ malfeasance. The hope is, a sanction will force the people to the point where they get pissed off, and speak out against their government’s actions, forcing their government to change their ways. As I said, sanctions usually don’t work.

There’s truth that some of the sanctions imposed on Russia will need time to take effect, but the vale of the ruble has dropped to unforeseen lows, their stock market remains closed, personal assets such as yachts and planes have been seized, and an awful lot of people can’t access much needed cash. All in the last week to ten days.

If I were Vlad the man Putin, I would have planned for sanctions, and he did, socking away some 600 billion dollars to see him through rough times. What the man didn’t account for was not being able to access that money, and I find that funny. I also find that indicative of how the man plans things, like his invasion which isn’t going exactly as the man planned.

I also can’t help but think, China is reassessing their plans for invading Taiwan, because we all know that’s on their agenda.